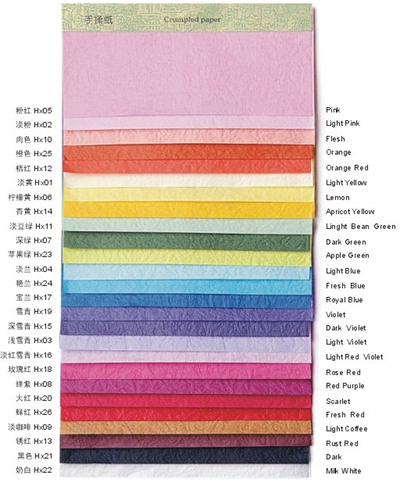 The Crumpled paper is available in 28 basic hues, the Pearl line in only 12.

Many years ago there was a shop in Tel Aviv that had a uniquely textured paper. It was called Twist paper. And then it was gone. Many years later, a new paper came to my attention. This paper is commonly known as VOG paper, since it was introduced by the Vietnamese Origami Group. Having now had hands-on experience with VOG I can say for sure - the Twist is back!

This paper is made in China and is sold in Vietnam as a wrapping paper for flowers and gifts. When it was discovered by the VOG, the makers said that "a new use was given to him, making it and its producers proud" (quoting from their forum with the help of Google Translate). Its brand name is really Crumpled Paper and there is another version, Pearl Crumpled Paper.

I have no information on the manufacturing process, but according to the published details, the paper has an "assurance of water resistance and expressive performance" and it's best used for "Floral wrapping, gift boxes, book-binding and other artistic covering applications". It is made by Wenzhou Kingdee Art Paper Co. Ltd., and is one of their 1800 available products.

The company's products are sold in the United States, Europe, Japan, South Korea, Singapore and the Middle East. At least, this is the official statement. I got very little help from the manufacturer, so many details are still a mystery - like: how do they get those bumps? 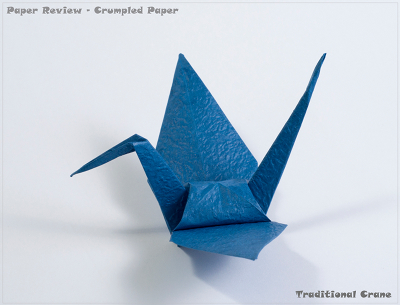 The first impression when holding and feeling this paper is that it won't work. However, the folding experience is very good. Although it doesn't have a smooth surface, it folds just as well as paper that does. Surprisingly enough (a repeated motif in the article) it was easy to get a sharp beak and tail. As I've done previously, I left some space when I narrowed beak and tail, so reverse folding them brought them to the exact place.

There is no real value in using this paper for action models. They all worked, but not particularly well.

The dog barked, but quietly!

The bird flapped only weakly.

The frog jumped just a little. 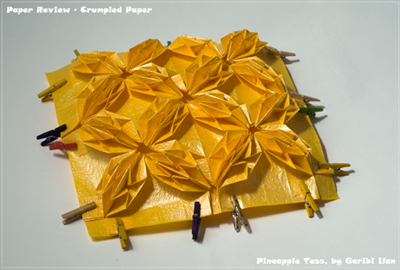 A game of light and reflection bring out the best of the Crumpled Pearl paper.

I wanted to have relatively big molecules, to show off the pattern. Folding the grid went reasonably well, but with two problems. First, it was very hard to see the crease lines on the pearly side. Since those are your guidelines, it was a headache. The second problem arises from the unevenness of the surface - from time to time your fold line falls on the edge of a small “hill” and it becomes crooked. Reversing the grid was not easy, although not a real problem. Once the grid was ready, the remaining pre-creases were very easy to do. Collapsing the tessellation was surprisingly easy. The paper is thin and doesn't feel like a 'snappy' paper like Stardream or Elephant Hide, but nevertheless all creases bent in the right direction and fell perfectly into space. This was actually the easiest collapse so far. The final result is quite unusual - the flat surface is pearly, shining with a faded yellow, but then the pineapple molecules reflect the light differently and shows a strong and sharp yellow. 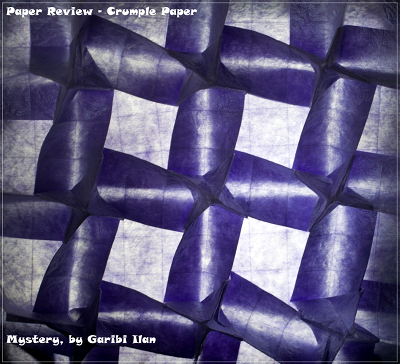 When light shines through the purple paper, it does wonders.

I folded this to get a backlit image. I just love this paper with back lighting! It is spectacular. It looks like thick gravy, or coloured hot lava. Fabulous! 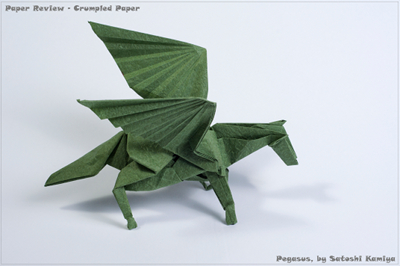 Easy all the way, this paper is great for folding the pegasus.

Although you will rarely see a green pegasus in nature, I highly recommend Crumpled for this model. It was easy to fold with all the way, from first creases - sharp and accurate - to the final little details. Sinking was easy, shaping the legs was a breeze, the head came out perfectly, and the multi-layered tail shaped well. The final result is well-proportioned and can be moulded with no need for wet folding. 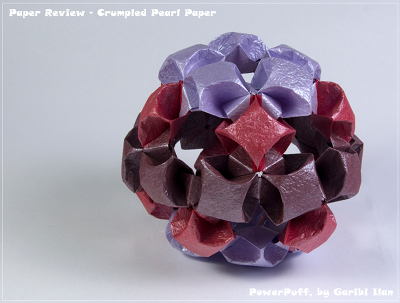 Although the result is satisfying, it was bumpy all the way.

All the downsides of this paper came out in this model. Even before the first fold, cutting it into squares was a problem. I usually fold it as desired and cut it with an envelope opener, but here the bumps made the gadget unreliable and I had to cut it with a knife. Folding was easy, but puffing was definitely not. The bumps wouldn't let me shape the edges of the rounded part. The surface tension is low and the look is not satisfying. Even worse was the assembly. The paper is too soft for the tabs to be inserted into the pockets. It just crumples before going into place. I had to glue every third unit, since the tab should go into a bent pocket - which is an impossible task with such a soft paper. 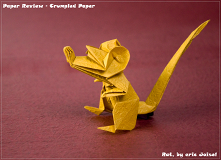 The unique texture gives this classic model an extra charm. 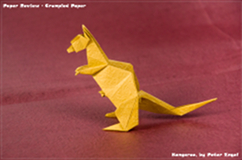 With it being highly suitable for animals, we couldn't resist adding the giraffe and kangaroo by Peter Engel.

The texture of the paper screamed to me - animals! So I decided to add two more 2D animal models: a kangaroo and a giraffe by Peter Engel. This thin paper remembers the creases well, but with many layers it tends to open up too easily, maybe because of the spring action the bumps give it. Using some MC can counter that effect and improves the final result dramatically. On the other hand, it does seem that the embossing gives the paper some extra strength. 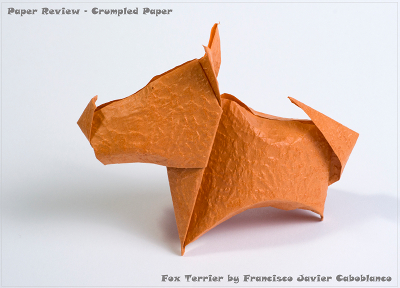 Some wet folding was needed to prevent the dog's legs from spreading wide.

All went well, until the last step, going 3D. Trying it without wet folding showed me why we consider this to be a wet folding test. The model spread its legs wide and nothing could hold them back. I used some moisture on the inside and outside and things improved. The paper's manufacturer says that it is water resistant but it isn't. The paper absorbs water, but does not get mushy, nor does it easily tear. Moreover, all the bumps are gone once it dries.

The paper is much too thin for wet folding the Polar Bear model.

I love this paper. It got Gadi hooked, too. I was very happy with both the process and the result for tessellations and complex models. Even simple 2D models came out nicely, as you can see with the giraffe and kangaroo, neither usually on our list of models. Using wet folding in the process may become awkward, since water tends to flatten away all the crumples. And the paper is way too thin for wet folding. For modulars it is not recommended.

Searching flickr for VOG only one image that uses this paper was found. All the others were images of the actual VOG people and their models. Even trying Twist, Crumpled and Pearl gave no results. I am not saying nobody is using it, just that no one cares to mention the name.

This isn't surprising, since it is very difficult to find if you do not live in the Far East. With only one online option, and probably the only option including off-line shops, it will be hard to get your hands on it. But it will surely be profitable if you do!

Be aware, the numbers in the summary table do not do justice to strength and beauty of VOG paper. We highly recommend trying it.

Bottom line: old or new, it's hip and refreshing!

This paper is used many by VOG members, because in vietnam is chepear and easy to find. Many years ago i contact manufacturer and you can buy starting from 2000 sheets same color. We need to wait to see this paper on others shops, because in my opinion is one of best paper for origami.

One month ago I bought this paper in Moscow. It was sold as a wrapping paper, 64x64 everything matches! And I should say it's okay for modulars. I didn't fold many, But I'm satisfied. The locks of modulars must be strong enough thogh=)
I don't have pics jet, but I'll have them in 2 weeks I think. And of course I didn't know that it's called VOG paper!
Here are my pics
http://www.flickr.co...
http://www.flickr.co...