Ask non-origami people about paper mills, and someone will mention Fabriano.

Based in Italy, this mill is part of the Fedrigoni S.p.A. Group, the second largest special paper group in Europe. Their products vary from office paper, banknotes, drawing and fine arts paper, to handmade papers.

I found some interesting facts about paper on their website. The Arabs increased and spread the knowledge of papermaking throughout the west. And in the second half of the 13th century it reached Fabriano, a little town of the Marche inland. There they added three innovations which led to the rise of Fabriano as the cradle of modern papermaking: watermarking, the invention of the hammer mill (replacing the stone mortar and the manual wooden beater) and the use of animal gelatine for surface sizing, allowing for better writing.

They make a huge range of different papers. Here's what they say about Ingres:

"The particular grain of the surface and the highly light-fast colors are the principal characteristics of this laid paper. It is acid free and particularly recommended for deluxe editions, advertising (company presentations, posters, calendars, brochures, leaflets and catalogues), fancy paperwork and book binding applications, drawing (pastel, charcoal) and collage."

For some more information on Ingres see the Wikipedia article on it.

So, can we consider origami as "Fancy paperwork"? 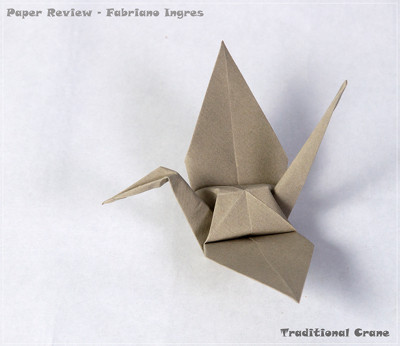 Nothing special here, the paper is folded easily but it is too thick to allow a sharp beak. 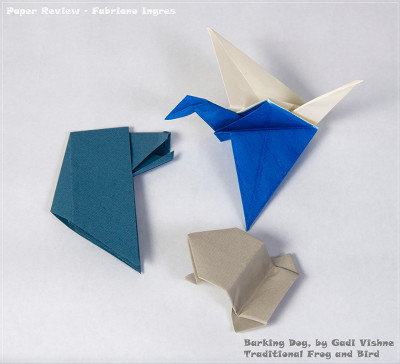 This group benefitted the most from the Ingres paper and its stiffness. The difference between with or against the grain is easily distinguished.

While pulling the bird's tail you can feel how the paper pulls the wings.

The frog jumps pretty high, thanks to the springiness. 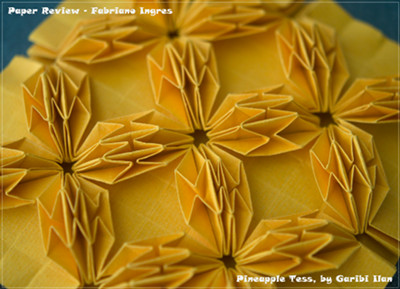 Considering its thickness, it works quite well with tessellations.

I was expecting some trouble with the along-the-grain folds of the grid, and was surprised to see that it was no big deal. Although the surface is wavy, and you can feel it by moving your fingernail over the bumps, it is hardly noticeable while folding . From time to time when you hit exactly the thickest part of the wave, you feel a bit more resistance, and the crease line may refuse to go straight. Reversing a fold is done easily, and you can feel that the paper "breaks" when changing the direction of the fold. During the pre-creasing, I found it hard to make diagonal lines, since the paper is not stiff enough to be broken on the corners of the grid`s squares. Finishing the pre-crease, you get the feeling the paper is too soft and pliable, more like a fabric than a paper. It also looks "messy" since all short creases tend to spill over, and every bend is visible. The first stage of the collapse went well, with the paper almost snapping into place. The second one was surprisingly even better, as it relied even more on the stiffness of the paper. In the end, the final result looked good. 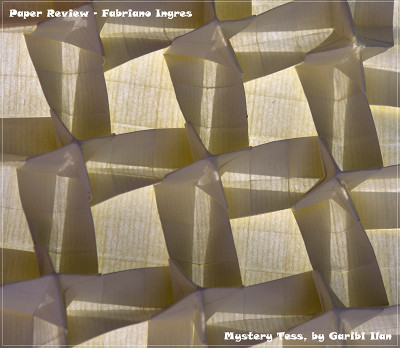 Back light highlights the unique texture.

Again, I had no real problem with the grid. The collapse went well, but the process left some evidence of fatigue in the corners of the crosses. However, the paper will yield to strong finger pressure. 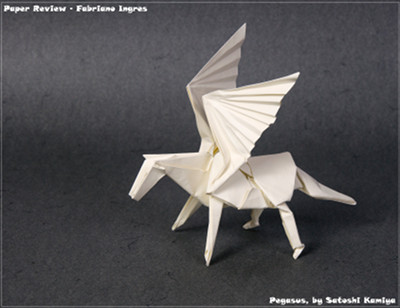 Complex models suffer from the thickness, disabling the fine details.

There is a nice resistance to pressure when folding in any direction other than parallel to the grain . You can feel it during the sink folds (step 37) but it was still comfortably easy. Going deeper into the more advanced steps, the shortcoming of its thickness start to appear. The body is hard to handle, and tucking in the belly layers was hard but still possible. The legs were not. I skipped the last small details of the hooves. 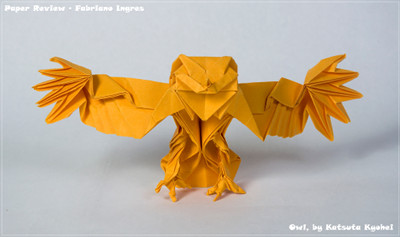 Like complex models, box-pleating models work good, but with the last steps of shaping.

The paper is thicker than usual, but can be handled. As with all box pleating models, there are a lot of sinking folds, and the paper is well-behaved here. It thickness is felt when pre-creasing the legs. Before the sink - when you make a sharp crease to one side - the inner layers are hardly affected. My patience and ability came to an end when I tried to force the lower feather pleats - it is too thick. The final result is satisfying, but not ideal. 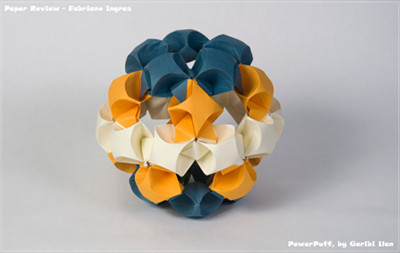 It’s a hassle to cut 30 units, but worth the effort.

I chose 3 colors, white, yellow and blue. The stiffness is good for this model. I tried to go with the grain, against the grain, and to use both sides of the paper; all were folded easily . However the paper did tear when I tried to force it to the corner. Puffing the units was easier than usual, and the curve was sharp and clean. The assembly went like clockwork, tabs went inside pockets firmly, and the lock is strong. The final model is firm and holds its own weight easily. 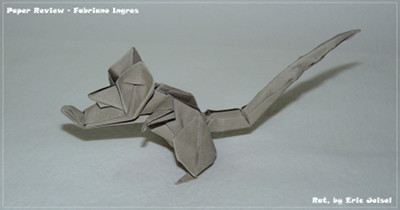 The rat suffered from the thickness of the paper.

The paper is very heavy. It's very nice for curves, but only for few layers. Not the best for the Rat. It's hard to make multi-layered fold with it. 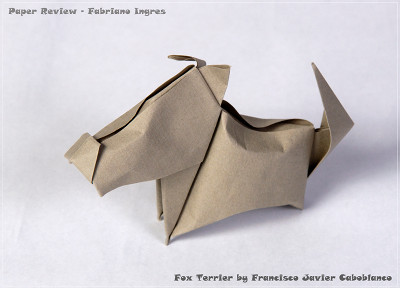 Just a bit of moisture helped to keep the legs in place.

I know it's a simple model, but it does give a hint about the 3D behavior of the paper. The stiffness is apparent here, even with few layers, but the model benefits from that with the final moulding. Without wet folding the posture is almost as I want it, and with some moisture it is perfect. 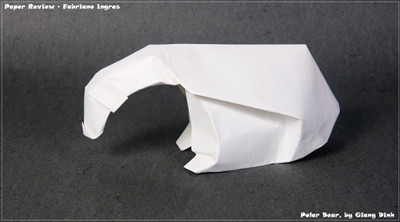 Ingres is good for wet folding.

Shaping 3D models should be the best feature of this paper and it is. I used the 160 GSM paper (note that all other data is with respect to the 90 GSM paper) which is better suited to wet folding. The paper absorbs the water nicely if spread evenly (I am using Giang's method of a nasal spray bottle filled with water). It dries within 5-6 minutes. When dry it holds the new shape. However, with this thickness, some of the creases didn't require wetting at all. 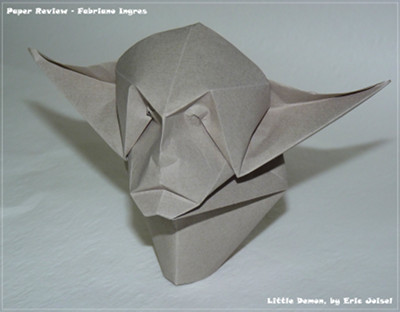 It's easy to shape faces and large surfaces into 3D.

The paper is very good for models with few layers. It is easy to shape and mould large surfaces. 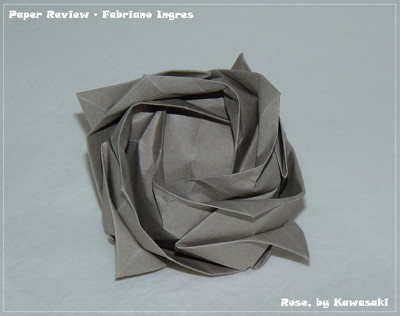 The rose is easy to collapse, but it's hard to shape the petals.

The thickness of the paper helps to hold the creases accurate even when collapsing something like this model. On the other hand it's hard to open the leaves for the finish.

As I go through this review, I see no excellence in any particular test or model. Strangely enough, this IS the strong point of this paper. It is a good paper, balanced, that can give good results in almost every type of fold.

Being thicker than other papers in the same weight group (around 90 GSM, like Tant and printer paper), it's stronger, can hold its own weight easily, and if you can find the lively old colors, it's a good buy. For traditional use it seems unnecessary to bother with measuring and cutting Ingres. On the other hand, action models will benefit from its properties. Complex models can be folded, but with difficulty, so for this Ingres is not highly recommended. Modular folding fares better since the paper has a lot of friction and a good weight to strength ratio. However, 3D models benefit most from this paper with its strong bending resistance and good behaviour in wet folding conditions.

Searching for origami images on Flickr appears to show that it is not one of the popular papers; only 60 images came up when searching for Ingres. Most are 3D models, masks and animals, but there are four tessellations and one Modular model. Widening the search with Fabriano I got 155 results.

Bottom line: best in none, good in all!

Note: with this review we have changed the score table! We are replacing memory, forgiveness, tensile strength and bending resistance with the suitability of the paper for a particular folding task. The previous 10 papers will be rescored appropriately.