When you think about handmade pap, three names come to mind: Origamido, Unryu and Lokta. We had already reviewed the first two, so it was time to complete the trio.

The best information I found about Lokta came from Wikipedia:

Nepalese handmade Lokta paper is made from the fibrous inner bark of high-elevation evergreen shrubs primarily from two species of Daphne: Daphne bholua and Daphne papyracea, known collectively and vernacularly as Lokta bushes.
These bushes proliferate in open clusters or colonies on the southern slopes of Nepal's Himalayan forests between 1,600 and 4,000 m (c.5,250-13,000 ft). Historically the handcrafting of Lokta paper occurred in the rural areas of Nepal, most notably in the Baglung District. Today raw Lokta paper is produced in more than 22 districts in Nepal, but finished Lokta paper products are produced only in Kathmandu Valley and Janakpur.
Lokta paper's durability and resistance to tearing, humidity, insects and mildew have traditionally made it the preferred choice for official government records and sacred religious texts.

As with most handmade pap, Lokta has long fibres and the slow cleaning process is intended to keep the fibres whole, long and unbroken. This results in a high quality product, but there is a price for such long fibres - can the paper hold a crease?

We immediately realized that Lokta isn't suitable for simple action folds or modulars, and as such no results for these models are given here. We concentrated our testing on the genres that are more suited to Lokta's properties: more 3D animals and complex models. 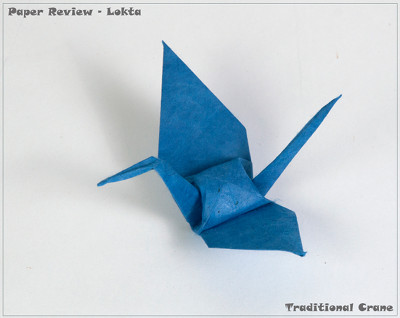 Too sophisticated for simple uses.

The first sense you get is that the paper is soft. It's difficult to get a sharp beak or wing tip and, when stretching the wings to the sides, the top part resisted my attempts to get a lovely curved line. 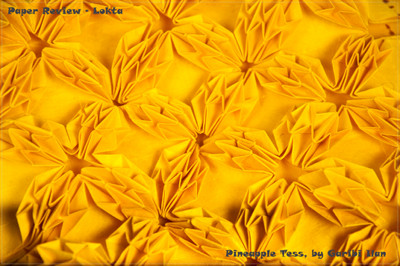 Hard to fold, but the final product is beautiful.

While folding the 40 by 40 grid, I was nervous that the paper might be too soft to collapse cleanly. The pre-creasing showed more of Lokta's shortcomings. The paper doesn't like diagonal fold lines and tends to drift away from the correct line. The collapse has two steps, and the first step immediately realized my fears. There is no "snap!" feeling but the paper did succumb to my will, since it has none of its own. The second phase of the collapse was a fight! The paper is too soft, and I had to use many clips to hold it where I wanted it. There is very little snap effect, only where the paper is thicker, and the whole process took me much longer than usual. But I did it, and the final look is very nice, although you can see that it's not accurate 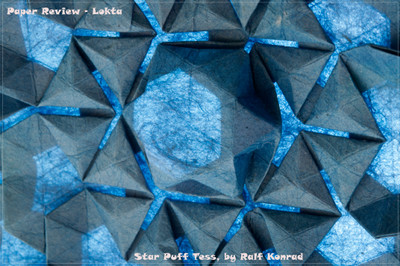 Great shadows with back lighting.

The 32-division grid showed more shortcomings of this paper. Although it breaks both ways easily, there was a lot of residue from the bark that really annoyed me. The collapse was no real problem, but the paper is too soft. I finished the first stage and started to make the small triangles, with a good response - the paper breaks and stretched easily. The puffing of the star, though, showed the problem of soft paper - it was a little hard to make them stand out as there is no sense of snap-into-place with it. 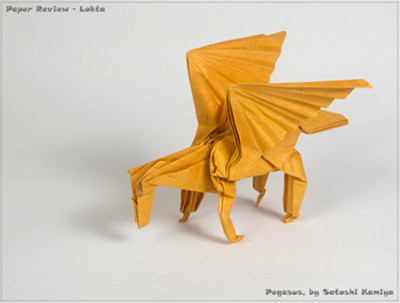 Not easy to fold, but worth the effort.

Using the yellow sheet, I started with no real problems. Yes, it's a soft paper, but still it kept the fold lines and gave enough resistance. Even the open sink went smoothly. And then lay started to accumulate. The legs and the abdomen were difficult to do as the paper kept unfolding itself. This was not fun at all. More frustration came with the final details, as I found the paper much too soft to be moulded at will. I squeezed the hooves hard, hoping that it would hold. The final model is interesting, given the paper texture, but without any strengthening treatment it looks messy. 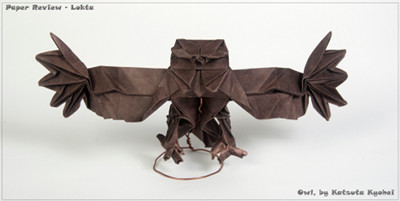 The texture really enhances the model.

The paper size is 45cm, and it comes folded in half, so I used it like that, although usually I fold this model from 35cm. I chose the dark brown side that had the leathery look for the outside. The uneven thickness of the paper is immediately apparent. The thicker parts break visibly and some residue of thick bark may also disturb a little, but the steps are flying past! This paper is so foldable! Maybe it's the size, but it's a pleasure. The first speed bump is sinking the talons; this portion of the sheet is softer, fabric like, and the execution is slower, yet still possible with no real problem. Again with the wing tips - manipulating so many lay was done against a lot of resistance and the lay kept opening up. I managed to fold the legs, but the layering of the wings' feathers was hard. This paper is not like most of the others in the pack; I guess the color gave it stability. The final model is impressive. 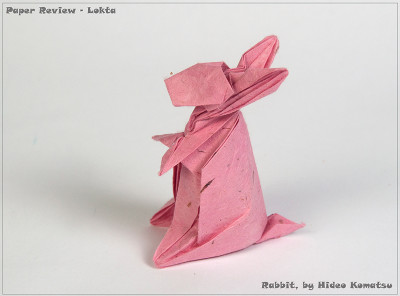 I went for the pink option. This paper came from the same batch and immediately showed the differences from sheet to sheet. It feels soggy; creases tend to open up unless you hold them. It's foldable, but the feeling is very soft. The softness was irritating while trying to give it a 3D look at the end. The sides of the body jumped back again and again. The final model just begged for some MC to keep itself from opening up. 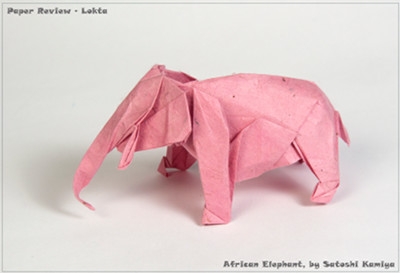 Lokta can hold a 3D shape.

After buying his second book, this model looked like a great candidate to check 3D animals. With a memorable reference to Dumbo, I chose pink. The first steps went OK, although it was difficult to maintain sharp points for the tusks. Even the sinking (twice) went well. The neck stayed whole unlike the Tant model I made which tore at the neck. 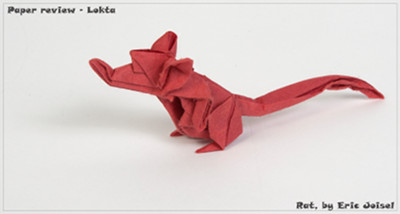 A miniature rat suffers from the resistance of the paper.

I like to fold this model from a relatively small sheet. In the first stages there are some reverse folds to do, and as soft as this paper is - it is harder to reverse it. Trying to mould the model into the desired shape is almost impossible. The final model tends to open up and is unstable. After a few days in the jaws of a wooden pin, I managed to prepare it for the photo shooting. 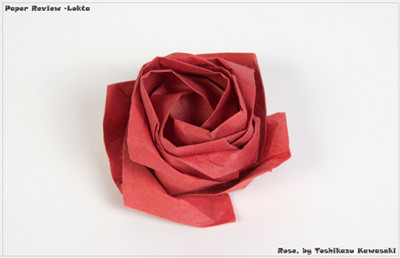 The petals uncurl, but the look is very nice.

Again, I found it hard to maintain the shape I wanted. I couldn't even collapse it accurately, since the marks are not strong enough; this paper is low on memory. 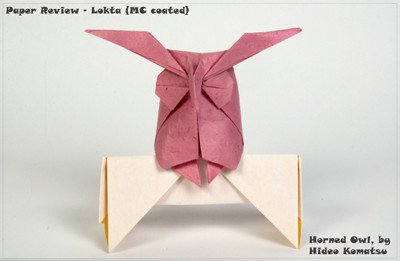 As the paper is too soft, and in order to give a full review here, we realised we had to loosen our principles and test it after treatment in MC. The paper shrank to 23.3cm×23.4cm from its origin of 23.5cm. I had to cut 1mm from the longer edge. The sheet dried in about 10 minutes and after one night under heavy glass, was flat and ready. Folding the paper after MC treatment provided a better experience. It's easier to reverse and manipulate fold lines. Shaping the full curve of the body went well, although the ears didn't stay where I wanted them. An undeniable improvement but the softness is still evident.

It's an iconic paper. I had heard about it many years before I held it my hands. Now, I can say it has many good reasons to be iconic. Mainly - it's the look; the texture, the big variety of colors, the long fibres, all promise you get a beautiful paper. Secondly - it's strong, super strong. Both reasons make it a hit among paper lovers, but for us paper fold, there are some distinct weaknesses. The main one is its resistance to folding - it becomes a clash of wills - yours and the paper. I am glad to say that we won. Add MC to your side, and your victory is assured.

This paper is almost exclusively bought for complex and 3D models, not for simple models, nor modulars. You can use it for tessellations to get a remarkable folded surface, but it really goes well with animals. It's thin enough for multi layer models, and if you treat it with MC before folding or even only in the shaping steps, you will overcome most of its shortcomings. On Flickr, I found more than 550 images of Lokta, 80% are animals up to complex level; the rest are tessellations and a lovely number of proud own showing their collection of unfolded Lokta pap.

The score is not sky scraping, but it is misleading. The beauty of it is evident, and to really exploit this paper you have to treat it right and choose the right model.

It's a solid paper that will last for many years, stronger than it looks, and with many benefits.

Bottom line: it's a must buy for intermediate to complex animal lovers!

Do u think it should be better with MC Glue? Although i've never treated a paper with MC Glue... When treating papers, do i treat it with MC Glue on both sides or just one?

Some questions about this paper:
1. When treated with MC glue, does the paper hold the shape nicely and not like spring back?
2. Does the finishing touches of a model need shaping with glue or is it fine?
3. Is this a good paper for super complex models wherer the layers get really thick and u need it to hold the shape?
Thanks.