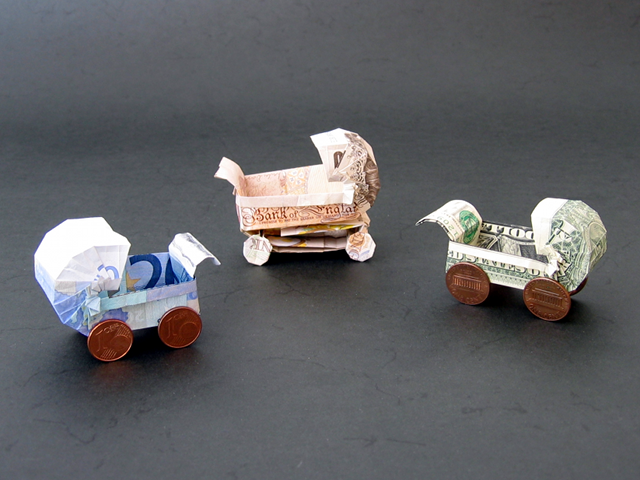 Good friends of ours are expecting their first baby. Knowing that it's hard to find just the right present (without giving something they possibly get from someone else) we figured it might be best to give them some money. So I started searching for a nice money fold - and found this one. Isn't it lovely?

It works with different currencies, as it doesn't depend on a specific aspect ratio of the starting sheet of paper. Anything somewhat close to 1 by 2 will do.

To prove the point, I decided to check what currencies I had in the house. The result is a pram from a 20 EUR note (plus coins for the wheels), one from a $1 bill (plus coins for the wheels), and one from three 10 GBP notes. Obviously, I could have folded the wheels in all currencies, but I didn't have three 20 Euro notes at home, and once I folded the US Dollar I was running out of time, so made do with coins there, too.
I also had 20 Swiss Franks, but unfortunately only one note, and no coins. Else there might have been a fourth in the lot.

Love these --- very timely as a friends have just had their first child.

But --- who could bear to unfold the buggy in order to spend...? Do you give the folded $1 bill along with a traditional cash gift...?

Yes, I'd suggest you fold a baby buggy from $1, and then add a normal money gift. For example, Dominik Meißner suggests you fold a large bill into a (very basic) baby (a rectangle will do) or baby blanket and put that into the baby buggy.

This is fun Sarah! Thank you for sharing it.
I also visited Dominik's page and saw her beautiful work. Great that you brought her work to our attention!
My best for Felix too.
Leyla

try following the video ( https://www.happyfol... ) along with the diagrams. Hope it helps!