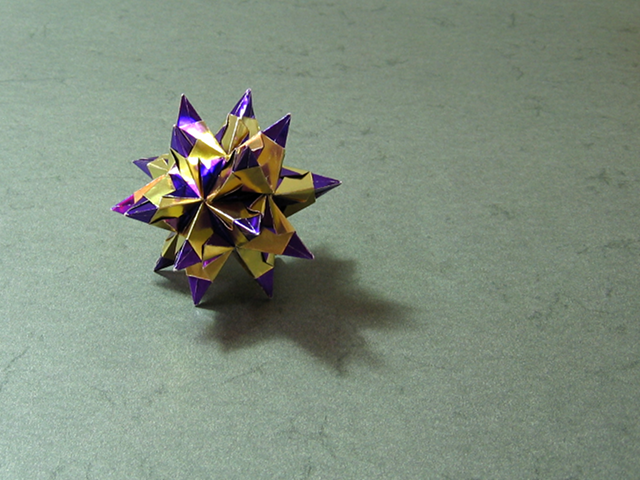 As to be expected at an origami convention in December, lots of people folded Paolo Bascetta's stellated dodecahedron, commonly known as the "Bascetta Star". I decided to give it a go, too, and here's the result. I used 30 squares of foil-paper-foil sandwich, which isn't the easiest to work with. That's why I only use it with very simple models, and the units are straightforward enough to fold.
Paolo was at the convention, too, and I'm guessing he taught it to a group, it might even have been one of the announced workshops. I learned it from someone else, though, as many others did too, I am sure. It's always nice to see when people go to workshops, learn a model, and then go on to teach it to others at the convention.

Are there any diagrams for that Sara?

There's a booklet on this model, see http://www.amazon.de...
I also found a YouTube video on the model: http://www.youtube.c...

As far as I know neither have been approved by Paolo Bascetta, though. :(

Thanks for the reply Sara i'll try this

Hi, Sarah.
I suppose that the correct name is Stellated Icosahedron, since the model has 20 spikes with each one reaching the face of an imaginary regular icosahedron evolving the model.