As a tessellator, I admit that I love Elephant Hide, but I am always looking for other options. Unfortunately, there are not that many good, thick (but foldable) papers out there. One candidate however is Efalin, made by Zanders from Germany – yes, the same company that brought us Elephant Hide.

Unsurprisingly, it is not intended as an origami paper. Far from it! It is mainly used for book-binding, and as such, it is strong, durable, resistant to dirt and moisture, it has a lovely finish and can be wiped clean!

But it is thick! Thicker than EH or any other paper we have tested so far, which does raise a question when one considers using it for origami. On the other hand, it has a lively palette of colors and it is wood-free and acid-free: all properties to indicate that it might be quite good for origami.

But there is only one way to decide how good it is, so we took out our scalpels, turned on the flash lights and set to work. 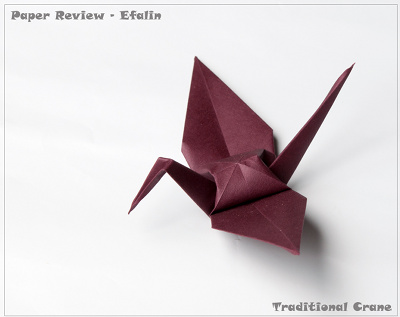 This is not a classic paper for classic use.

This paper fights back. Some extra force is needed to get all the sharp points you want. I immediately switched to my bone folder to have this extra power. Folds reverse easily, and puffing the centre back is done without effort.

The flapping bird flaps consistently with even movements of the wings. There were no signs of tears or fatigue in the paper; the wings kept coming back to the desired position again and again. You get a sense of a very long lasting model here.

The frog jumps amazingly far. The tension of the 12 layers in the legs is overwhelming and the frog is released like a shot out of a cannon! 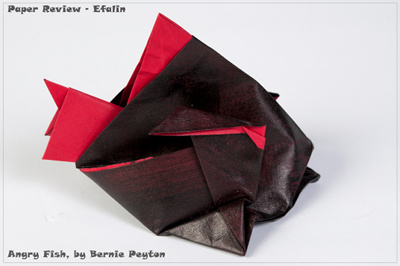 This is the best paper for action models we have tested so far.

The Angry Fish requires red and black paper. I colored the red linen paper with black Folk Art water color. Painted, the paper feels and looks like leather, yet it still folds like paper. Predictably, the result is sturdy and works perfectly; it puffs immediately, and the push-pull mechanism is highly reliable. We have both beauty and strength here! 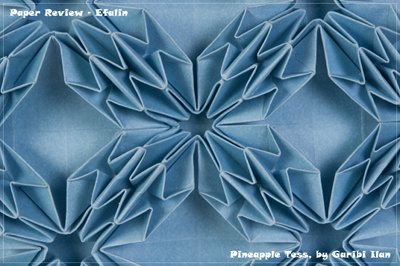 Folding the 26 by 26 grid was a struggle. The paper resists at first and then gives up in a very definite way. The inner side, when flattened, has a visible bump. With tessellations the most important property is the behavior through the collapse. This paper, being thick, is also a little too stiff for my taste. It made me a little clumsy and, through the first stage of the collapse, I made too many wrinkles. However, the second phase benefited from this stiffness, as flaps jumped into position with little effort. 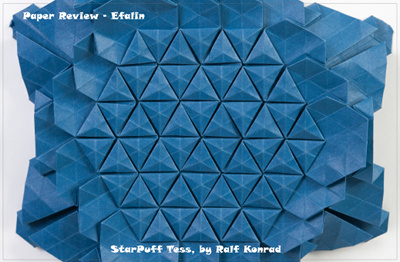 You can achieve highly accurate results with Efalin regardless of its thickness.

First, I folded a 32 division grid. This took some effort when breaking the fibers, but was significantly easier when folding with the grain. Reversing all the fold lines of the grid demonstrates an interesting behavior; it's not easy to reverse, but when the paper does break, it breaks on the mark. Folding the molecules is easy. The paper is thick, but this isn't a problem in this phase, it even helps as the paper is sturdy and breaks only where needed. Puffing the triangles was highly satisfying. Almost no misfires, all but one became flat and perfectly aligned to the others. 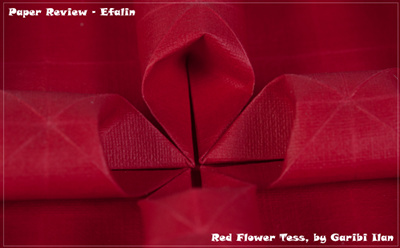 This paper screams Tessellate me!, so I tried one more. Folding the grid and the pre-creases went well. Some of the pre-creases are not done directly on the fold, but with two layers of paper on top of it. Using a bone folder, those also went well. The collapse showed the springiness of the paper, and the puffing went perfectly. 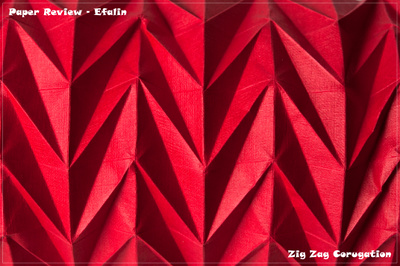 The sharp angled folds were too much for the Fine Linen texture.

The zig zag pattern needs sharp angles. It wasn't hard to fold it, but collapsing it showed the paper's limits. In these corners the paper broke and lost its surface tension, and from there it went downhill. It couldn't be fixed. Nevertheless, in the final model the pattern is still visible, and it even looks nice, but I wasn't really happy with it.

Although it is not recommended for complex models, the New Linen texture is foldable. 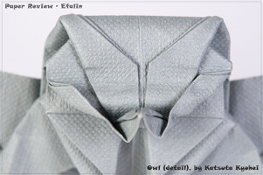 I used the new linen texture; see the image for how lovely it looks. This texture totally changes the behavior of the paper. All the imprints make the paper softer and more responsive to folding. It is as if the paper had been scored in advance. The first steps, making the grid and getting to the base, were easy, like 90gsm paper and not the 120gsm it actually is! The paper is still thick, though, and when you have to make a crease through six layers (step 34), this cannot be done accurately and must be done by folding the layers two by two. Thickness becomes even more of a problem when trying to get the small details. The tail has 12 crimps; I only managed six. On the good side, the paper has a memory similar to foil and all the wing details hold surprisingly well. 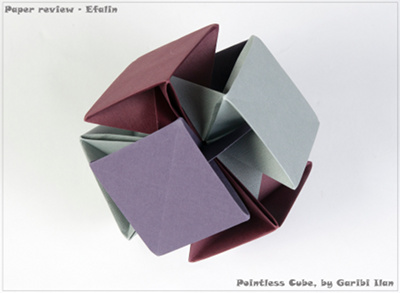 Efalin is only suitable for simple modulars.

Using two different textures; fine linen and new linen, the immediate feel is stiffness and springiness. The linen texture makes it even harder to fold (as you need to break all curves in the paper). The fold lines are highly visible. Wooden pins are required during assembly, but when all is in place, the friction as well as the sturdiness gives a stable model.

3D models need no wet folding to get a shape.

I didn't dare to try it from 15 cm. During most of the stages, you ask yourself why should you fold it from such a thick paper, especially when you get to the ears and have to squash fold eight layers. But then, after going through it all and you start to shape it, it's amazing - the 3D shaping is achieved with such ease! It was not a bad experience, but I needed to use my bone folder often, which helped a lot. The final model is totally worth it! 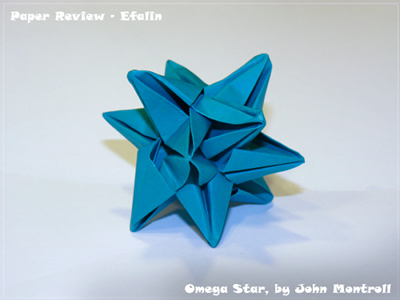 Far from satisfying for small models.

This is a geometrical model and I thought it would be a good candidate for such a thick paper. But I was disappointed to see that it was too thick. The corners are far from sharp and the final shape looks sloppy. 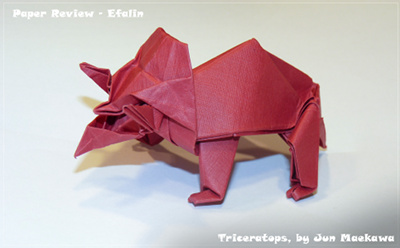 Doable, yet unpleasant along the way.

The texture does give the feeling that it is thinner than it really is. I managed to fold the model easily through most stages, but finalizing the model was difficult and I can't say I am happy with the result. 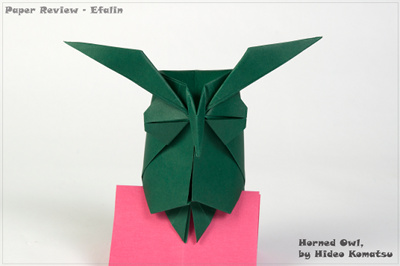 First steps went well, until a speed bump in step 15, when you have to squash fold a flap. The paper resisted this move and I got a long crumple instead of a fold line. I had no such trouble with thinner paper. From there on the thickness is no longer an issue and sculpting the model into its full 3D shape is easy. The lock, based on two edges of the paper stuck on each other, benefits from the thickness and stiffness. 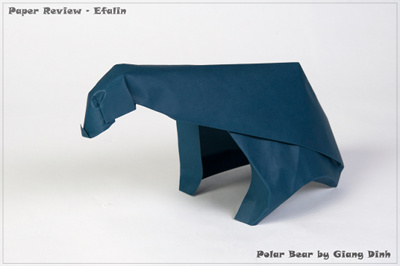 Some curls appears when wetting the paper.

I had no white paper, so this one is a blue polar bear. I used the smooth texture. The paper doesn't absorb much water and drops were left on the surface. When wet, the paper does curl a little. Shaping with the wet paper is very easy, but it is doubtful whether it's necessary, since the paper can hold form even when it is dry folded. After drying, the new form is very stable, but the surface is a little wrinkled.

Thick papers are bound to have weight issues. We all prefer thin, elegant papers that yield to our will and fingers. This is not that kind of a paper. It fights back, and you need time and patience to train it. But when it is tamed, you will get interesting results.

This may be the most divisive report so far. Gadi doesn't like it at all, saying it is way too thick, but I found it to be intriguing and usable.

Why should you buy it?

Efalin is great for 3D animals and models. It stays in place without the need to wet it, and if you do, you get even better results. For tessellations it is highly appealing, with a wide color palette, and very good behavior, both through the pre folds, and the collapse. For action models it is exceptionally good! It will work again and again without any fatigue signs. Modulars will benefit from high friction, although I can't see anyone cutting it to 7.5 cm squares to make a nice globe; too much hassle and it won't work at that size. For complex models it is not suitable, unless you go really big!

On Flickr, I found only 30 images of Efalin, mostly with tessellations and mostly from Germany!. Also some boxes, 3D roses, two animals and a single modular. It may not say much, but it looks like Efalin isn't widely known in the origami world.