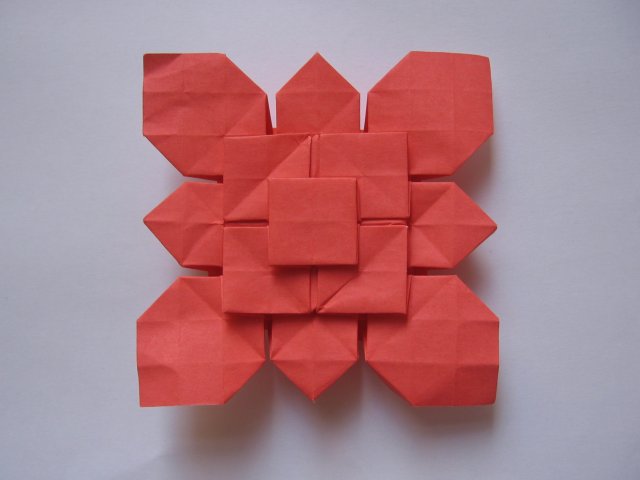 Can you make a video on this model? I have been wanting to do it but Ravi Apte's website is not working. I appreciate you efforts.

Can you please make a video of the cloverfolding model. I really want to make it.

It is just the hydrangea minus a couple of the last folds! it is done by the same person, "Shuzo Fujimoto ".

I really don't know if this model has been diagrammed anywhere. I'm not aware of any source (hence it's not mentioned in the video or on these pages). Sorry.

thats ok sara i tried the video again and this time i got it!

Thank you very much for this video.

I tried 3-stage clover folding. And when I saw your 7-stage clover folding model's photograph I was really inspired by it. It is awesome. And most important is it is made up of just 19.5 cm^2 paper. When I tried 5-stage (Actually I thought I was doing 7-stage, but I just double the number of creases, and it became 5-stage clover folding), I started with a very big paper, and still it was bit difficult to make precrease. (I don't even know weather there is something called 5-stage, since it doesn't have that nice last petal part.)

But I enjoyed doing that also. (It is actually happy folding).

Here is the URL of picasa web album of clover foldings which I made.

http://picasaweb.goo...
(This are not perfect, but this is my first attempt.)

Good to hear you enjoyed the video. As to your "5-stage" clover folding:

First of all, you did a very good job. I usually don't like patterned papers for tessellations, but this one works quite well. It makes it look like patchwork.
Second, the formula for determining the grid to start with is: 6*(no of stages)-2.
If you start with a 32 by 32 grid, then you are 2 grid squares short of 6 stages. But that only means that for the last stage you have 2 rows of 2 squares rather than 4 squares. That's why you have another rows of squares as the last stage, rather than the finish I showed.
Having said that, you might want exactly that effect, it is by no means "wrong", it's just slightly different. So, in essence, you folded a variation of the 6-stage clover folding. :)

I bought new paper, and might fold another clover folding with more stages. I don't think more than 7 states are feasible with a 19.5cm square. The grid squares were 5mm wide (40 by 40 grid), and that makes the collapsing stage quite fiddly already.

Thank you very much for your replay. Somehow I didn't see your reply earlier. Thanks for the formula for determining the grid. I'll try sometime for 7-stage.

About the patterned paper, I too wanted to use plain paper (at least for Hydrangea (Shuzo Fujimoto): High density patterned, http://picasaweb.goo...), but I didn't get it. I leave in a city, where even if I want usual 15 cm^2 plain origami papers, I need to give order at least 1-2 month before. Only wrapping papers are easily available.

Once again thanks for video's and other things on this site.

This is truly fantabulous. It looks so complex and for a moment i thought it was different pieces joined to form this single shape. But it is astonishing to watch this made out by just folding a single sheet of paper. Great work. Kudos.