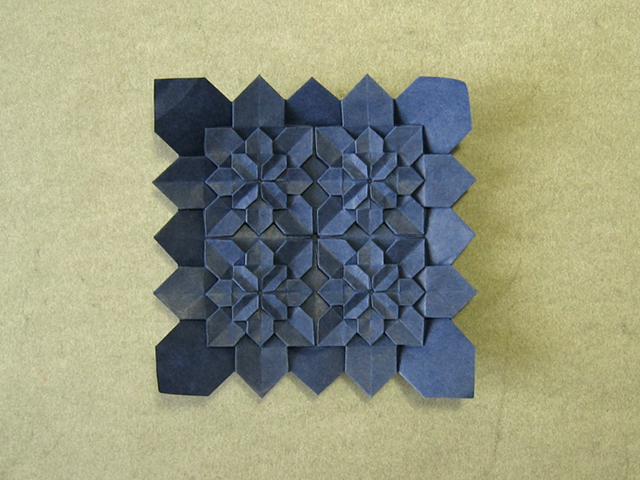 Someone contacted me asking how to tile the hydrangea, as seen on http://www.flickr.co...
I decided to give it a go and managed to work out how this could be done. Admittedly, my first attempt failed, but the second one worked out. Later I found a comprehensive description of the technique written by Peter Budai. He calls this tiling "high density", and also gives instructions for low and middle density.

The basic technique for high density tiling is as follows, and is the text I wrote back to the person that asked in the first place. It somewhat summarizes what Peter Budai nicely diagrams.

Essentially, you want to fold 4 hydrangeas on a square. Each hydrangea will use 4/7th of the square. So adjoining hydrangeas will share 1/4th in the middle. This is why in the middle of the completed model the outermost petals are "missing". Hence the folding sequence is as follows:

How do you divide into 7ths?
Thanks:)

Hello Sara... I was just wondering... If the method shows how to divide into thirds, then how do you divide into 7ths? I am a bit confused... THANKS! =D

Ah, the document has 3 pages. On the third page, it's shown how to do 7ths.

It's very simple :) Divide into 8 and cut one row and column. Paper is clear without "bad" creases.

Devide into 8ths, then cut one strip of two of the sides :)

You can use the folding method, but I just find these two easier.

A few weeks ago I was experimenting with 90 degree intersections and cross box pleats and got a result that looked like a level one hydrangea, without the flaps you have to fold under each level. With a little tweaking it now looks like a cross with a lotus-like flower in the center.

i made this too ,its reely nice:)
in the center, did you end up that you could fold another hydrangea too?
i did but i didnt i might the next time, anyhoo thanks for the instructions on it:)

sorry a bit of that last comment made no sense:)
i meant: i did get a possible hydrangea in the middle that i didnt fold, but will the next time:)
anyhoo thanks for the instructions!

Sara,
Can you please make an instructional video showing how to fold this model ? I really enjoyed folding the original Hydrangea I would absolutely love to make this beautiful work of art !

I'm not sure yet, maybe. But if you want to give it a try, check Peter Budai's diagrams: http://dev.origami.c...
Funnily enough, I figured out how to make this pattern before I found these diagrams. They make life much easier (as in you don't have to think as much - although I often find that's the fun bit).

I've contacted Alex to make him aware of it. The link is generally correct, but it seems there's a problem with the database that Alex is using.

I have just folded a high density Hydrangea, but I added a fifth flower in the middle. You just need to squash the central square behind the model as usual and then go on. If you're familiar enough with the model, it will fold almost by itself.

Thanks for the idea,
I've tried the 2x2 high density with a center flower, it's working pretty well.
you just need to way for the second stage of flower making to free the center stage

on this picture i've made 3 stages with a 4x4 high density
https://www.dropbox....
The paper is quite not good (A3 plain sheet paper)
But it works really well

I'm about to create a 3x3 on the same principle
but it's so long
I've not created the first flower stage.